hide
hide
No announcements have been posted yet for AA - Jr Sons.

The Ontario Hockey Federation is conducting a survey for Associations and Players/Parents regarding the Residency Regulations that are currently in place. The survey will remain open until April 30th.

The Northern Ontario Hockey Association (NOHA) will be hosting its second annual Under 14 Development Camp from May 27-29, 2022.

We are seeking volunteer Coaches and Trainers to assist with the event, which is being held for all 2008-born participants within the NOHA.

The NOHA will cover travel (gas), and provide accommodations for all out of town Coaches/Trainers, and provide meals. Job descriptions are available to view on the application forms.

Anyone who is interested in assisting for the weekend can complete the application forms located at the links below:

Note that the NOHA website is now located at www.noha-hockey.ca

Disclaimer: Personal information used, disclosed, secured or retained by the NOHA will be held solely for the purposes for which we collected it and in accordance with the National Privacy Principles contained in the Personal Information Protection and Electronic Documents Act as well as the NOHA’s own Privacy Policy.

This message may contain confidential information and is intended solely for the use of the individual or entity to whom it is addressed. If you received this message in error, please immediately delete it, destroy any hard copies of it and immediately notify the sender.

There is no hockey in the middle of a war

Sure, the Nickel City U12 AA Jr Sons would have dearly loved to capture the NOHA Tournament of Champions a few weeks back in Timmins.

With their record of 0-1-3, the Jr Sons were competitive enough to find themselves in the Sunday morning semis, eliminated by the host team by a final count of 3-1.

Yet talk to coaches and players alike and it’s clear that the Nickel City folks are more than a little pleased with everything that was accomplished during their three day stint in the home of Shania Twain.

Much of that is likely linked to the total of $2,655 that was raised by the four tournament entries combined, a fundraising effort that was based on an earlier initiative spearheaded by the Sudbury U15 A Lady Wolves team, all surrounding a desire to find a way to offer help to all of those affected by the current war in the Ukraine.

“We thought it was a great idea, not only for us to do it as a team, but to expand and see if the other teams in our division would accept the challenge of raising money for a good cause,” said Jr Sons head coach Kevin O’Shaughnessy.

“It started off with Pam (team parent Pam Therrien) – that’s how it came about.”

Given the assortment of 11 and 12 year old grade six students on the team, O’Shaughnessy acknowledged that there were many potential benefits to this initiative, including athlete education.

Despite their youth, the importance of their work was not lost in the least on the local lads. “You want to put yourself in other people’s shoes to try and help them out,” said Ethan Farquharson, a student at Immaculate Conception in Val Caron.

“They will know that other countries are praying for them, helping them out a little bit so that maybe one day, they can go back to school and leave the war safely.”

With a bit of a head start on the home front, right winger/defense hybrid Logan O’Shaughnessy is beginning to garner a little historical perspective, even as current events unfold half a world away.

“In the nineties, Russia was Soviet Union and then they became a whole bunch of little countries,” he said. “When the coaches talked to us, I thought about my family and tried to put myself in their position.”

“There is no hockey in the middle of a war.”

In order to captivate the entire team with this fundraiser, the Nickel City crew opted to have families commit to a certain donated amount based on every goal that the team scored in Timmins, with the understanding that the pledges were based on whatever folks could afford.

With that in mind and looking to up the ante, the Jr Sons needed contributions right across their entire roster on the ice, including from the young man who took one for the team, tackling a new position all while tapping into the skills he had developed in previous years.

“I like forward better (than defense), but this was still good,” said Logan O’Shaughnessy. “I can use my speed in a different way; like if I pinch and a guy goes wide on me, then I can still catch up with him.”

A centreman by trade, Lennox Therrien can relate to the need for quick feet as he works on playing a 200-foot game. “I’m always on the puck, using my speed to get all over the place,” he said. “I always try and have my head up, looking for my teammates.”

A sentiment which extends off the ice, as Therrien and his teammates demonstrate a concern for others. “I feel bad and wish that they (the people in the Ukraine) were in my position, with family and friends and a school that I can go to safely.” 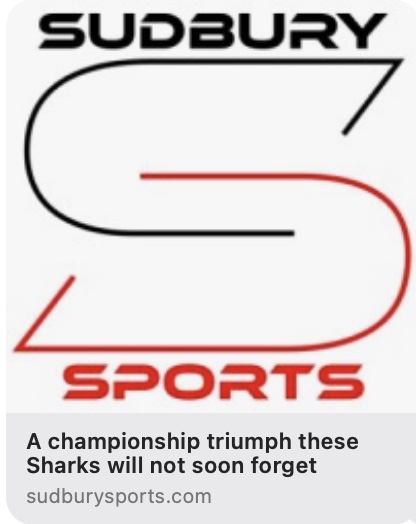